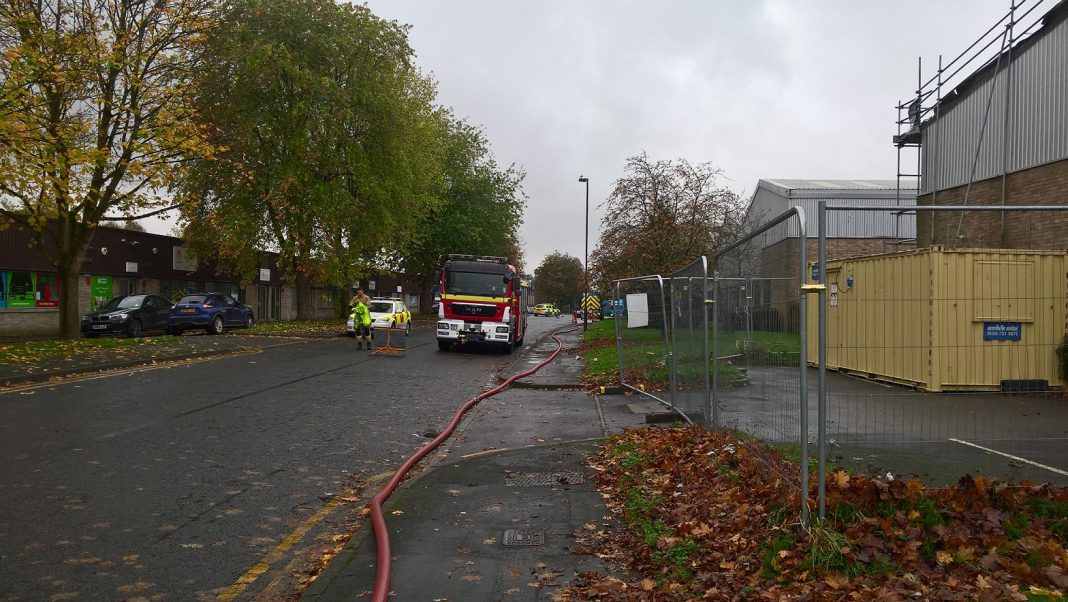 Council staff are involved in the response while Avon Fire & Rescue Service remain on site to dampen down the affected area. A cordon remains in place around the incident while Waverley Road and part of Lawrence Drive remain closed. People travelling around the area are advised to find alternative routes.

Avon Fire & Rescue Service today (October 26) confirmed that the building involved in this fire had asbestos in it. However health risks are low.

Dr Chitra Arumugam, Consultant in Health Protection at Public Health England, said: “During fires, asbestos containing materials may become damaged and depending on the ferocity of the fire, fragments of asbestos-containing materials can be spread over a wide area.

“It is possible that asbestos-containing material may have been deposited in ash or debris around the industrial site. However, this is of no significant health concern as asbestos fibres are held tightly within the body of cement products, such as corrugated roofs, and not readily released into the air during a fire. The risks to health are low and there is unlikely to be any significant exposure to asbestos, following fires involving materials containing asbestos.”

Council officers are working with the landowner’s contractor to clean up any asbestos- containing materials spread by the fire which may have fallen as debris over the surrounding area.

Officers will be carrying out inspections of the site while the clean-up operation is carried out by the landowner’s private contractor. Building Control officers have also visited to assess the structure.

Mark King, Head of StreetCare, said: “We are working with a number of agencies and the landowner’s specialist contractor to coordinate the clean-up following the warehouse fire in Yate on Tuesday. The cordon and road closures around the site will remain in place until further notice. We would like to apologise for any inconvenience this is causing to people and businesses in the area. People are advised to find alternative routes until the cordon is lifted.”

Businesses affected by the fire are working with the contractors on site who are coordinating the clean-up.

To view FAQs on asbestos and fires visit www.southglos.gov.uk/environment-and-planning/pollution/pollution-control-hazardous-substances/asbestos-and-fires/