This star was awarded to the Royal Navy for six months’ service afloat between 3/09/1939 and 8/05/1945 in the Atlantic, Home Waters, and included North Russia and South Atlantic convoys.

Members of the Merchant Navy, RAF and Army who served afloat also qualified.

Personnel must already have qualified for the 1939-45 Star (except where service was just for the six months up until 8/05/1945 where only the Atlantic Star would be awarded).

The colours of the ribbon represent the Atlantic Ocean. 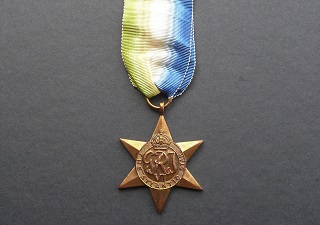