Awarded to service personnel who sustained a wound or contracted sickness or disability in the course of the war as a result of which they were invalided out. It was worn on the lapel in civilian clothes. The badge is numbered on the reverse, and it is now possible to identify the recipient from that number.
The purpose of the badge was to prevent men of military age but not in uniform from being harassed by women with white feathers.
Description courtesy of the MEDAL YEARBOOK. Image by John Davis © South Gloucestershire Council. 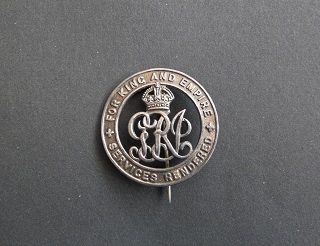