This war memorial is located at the junction of Northwick Road and Cross Hands Road. It contains the names of those who fell in the First and Second World Wars.

In March 1943, following a bombing raid that resulted in damage at the Cross Hands junction, the parish council sought help from Gloucestershire County Council for general repairs, a road widening scheme and refurbishment of the memorial. In October 1944 the memorial was damaged by a US Army lorry backing out of the Cross Hands Inn opposite, during the blackout. The cost of repairs was estimated at £95 and in June 1946 the US Army paid this sum in compensation. This money was used for renewing the original lettering, adding the Second World War names and making arrangements to move the memorial from the Cross Hands junction due to increasing traffic and concerns over further damage.

In December 1979 a poll was carried out to decide whether to move the memorial back to the original Cross Hands site. Of the 53% of the parish that voted 585 voted for the proposal, 324 against, and 89 were undecided. Due to the costs involved the parish council did not act on this. During 1993 a further poll involving a mere 10% of the residents resulted in a small margin in favour of returning the memorial to its original site. This time however, the movement was led by more active participants.

In 1994 the increasing number of participants in the remembrance service and the resultant lack of space in the cemetery led to the parish council mounting an initiative to move the memorial to celebrate their centenary. The move, costing around £3000, was partially funded by ICI and Zeneca, and South Gloucestershire Council was involved in providing and paying for structural work designed to protect the memorial.

By kind permission, all of the below information is based on the following source: Village Heroes produced by Pilning and Severn Beach History Group.  Nancy Vowles and Val George researched and put together the information. 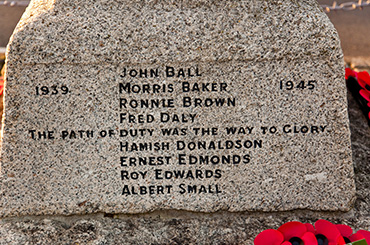