Issued to all of those who had already got the 1914 Star or 1914-15 Star and most of those who had received the British War Medal. Some six million are believed to have been produced. It is often known as the Allied War Medal because the same basic design and rainbow ribbon was adopted by thirteen other Allied nations.

The reverse has the inscription The Great War for Civilisation 1914-1919. 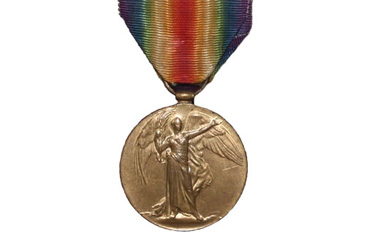