The 6th Maritime Regiment was one of several artillery regiments tasked with protecting merchant shipping from the threats from German air and submarine attack. It was based in Thornbury and covered all types of vessels sailing from various ports in the Severn area. The men of the Maritime Regiments were infantry rather than sailors and returned to their regiments on their arrival back in port. The officers did not accompany the men on the ships, undertaking an administrative role only. The headquarters of the 6th Maritime were at Kyneton House near Thornbury which was requisitioned for the purpose.
The 6th Maritime Regiment Royal Artillery was constituted on the 1st November 1942. Prior to that it was known as the 6th battery Maritime Anti-Aircraft regiment, part of the Maritime Royal Artillery and was set up in May 1941. As a result, the memorial contains no commemorations before that date.”
Taken from “An Introduction to the Maritime Formations of the Royal Artillery” compiled by Adrian Rose c 2005. Courtesy of Thornbury Roots 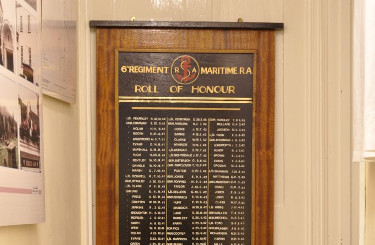 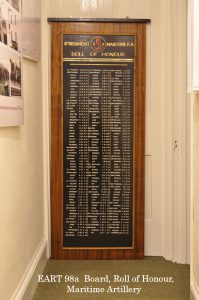