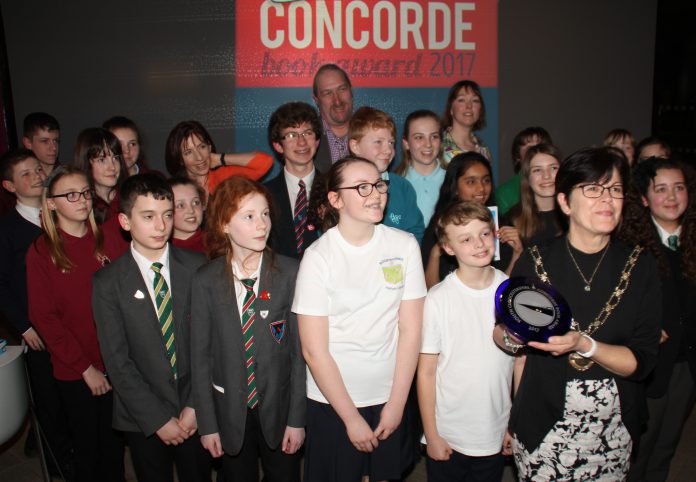 Civil rights novel ‘Lies We Tell Ourselves’ has been chosen as the 2017 winner of South Gloucestershire’s literature prize for young people the Concorde Book Award.

The debut novel by American author Robin Talley beat off competition from five other young people’s fiction titles to claim the coveted award.

Once again this year’s winner was chosen after an exciting district-wide reading challenge in which hundreds of young people from public and school library reading groups throughout South Gloucestershire worked their way through a shortlist of titles.

Votes were cast on World Book Day and the winner was announced last night (Tuesday 7 March) at a gala event at the Bristol and Bath Science Park at Emersons Green.

Chair of South Gloucestershire Council Cllr Erica Williams presented the award. She said: “I’m delighted to have attended the Concorde Book Award celebration again this year and witness the young people’s enthusiasm and passion for reading, which is really inspiring. The Concorde Book Award is an excellent example of libraries and schools working together to support young people to read more and develop a lifelong habit of reading.
“Congratulations to all the young people who have taken part, to South Gloucestershire’s school and public librarians for organising another excellent event, and last but not least to Robin Talley for her well-deserved win.”

Receiving the award, Robin Talley said: “It’s an incredible thrill to receive an award that’s given out by young readers themselves. I’m so grateful to everyone who’s a part of the Concorde Book Awards, whether as an organizer or as a participant. I encourage all of the students who read and voted for these awards to keep on reading, and to keep thinking critically about the books you read. It’s a wonderful way to learn, but more importantly, it’s a lot of fun.”

The scheme aims to promote a love of reading among 11-13 year olds, and thousands of young people have taken part since it was launched in 2007.

The Award is unique in being one of the few literary awards chosen by young people rather than adults.

This year’s shortlisted titles were Beetle Boy by M G Leonard; Car-Jacked by Ali Sparkes; House of Secrets by Chris Columbus; Lies we tell Ourselves by Robin Talley; Murder Most Unladylike by Robin Stevens; and Young Sherlock – Night Break by Andrew Lane.

Participants are also encouraged to contribute to a dedicated online forum as part of the process of sharing views on each book http://concorde2017.edublogs.org/. There is an award for the group that makes the best contribution to the blog.

For more information on the Concorde Book Award, see www.southglos.gov.uk/concordebookaward