The first in a series of nine bronze stars issued for service in WW2 (although the Arctic Star was not introduced until 2013). It was awarded to personnel who had completed six months service in specified operational commands overseas between 3/09/1939 and 2/09/1945. In certain cases, the minimum period was shortened (including death, injury and capture).

The colours of the ribbon represent the Royal and Merchant Navies, Army and Royal Air Force. 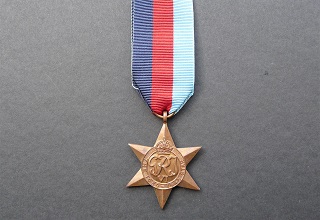