There is a war memorial plaque located in the quadrangle at the old Thornbury Grammar Site that is now the sixth form annexe of Castle School. It lists the names of 17 fallen former pupils of the Grammar School

The following report was published in the Thornbury Gazette on 17th December 1921 under the heading ‘Unveiled at Thornbury Grammar School’:

‘Yesterday week the tablet was erected as a memorial to the old boys who gave their lives in the war was unveiled and dedicated at Thornbury Grammar School. The tablet is made of oak surmounted with the school crest beautifully carved, while with the names of the fallen, seventeen in number are inscribed in gold lettering on a black background; it is placed in the school assembly room. In addition to the masters and scholars there were present the parents of the fallen, the Governors of the school and subscribers towards the memorial.

Canon Cornwall, chairman of the Governors, officiated at the short dedication service. After the hymn “Supreme Sacrifice” had been sung and a short address given by the headmaster, Mr C. H. Ross, the tablet was unveiled. Canon Cornwall in a short address to the scholars, said the memorial would remain as a permanent reminder to them of their duties to their King and Country. Although it was extremely unlikely that their services would be needed in a military sense, yet it was just as important that they should fit themselves for whatever contingency might arise, always remembering that those to honour whose memory they were now gathered put the call of their country and Empire first and thought nothing of themselves. The hymn “Oh God, our Help in Ages Past” was then sung and the service concluded with the Benediction and the singing of the National Anthem.’

The tablet memorial was originally erected on a wall in the assembly hall, but was later moved to the quadrangle at the Grammar School. As at 2017 a tablet is still there although it looks very different from the description of the original and a service was still being held each November in memory of the boys who died.

Following the end of the Second World War, two memorials were erected in the school.
The first was an electric clock with the dates 1939 and 1945 on either side of the face. This can still be seen on the south wall of the main building.
In 1950 the Quadrangle was converted into a second memorial and a plaque erected to those who gave their life during the war. 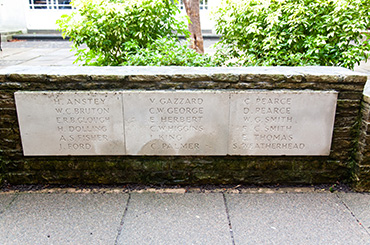