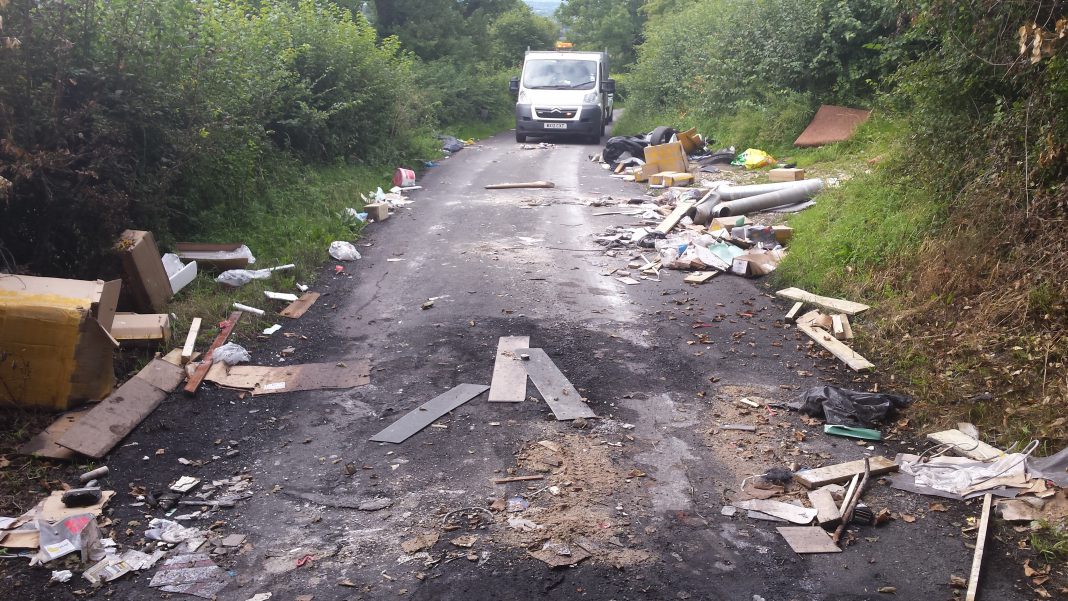 A man from Pontypool has been handed a nine month suspended jail sentence, a four month curfew and ordered to pay £950, after admitting three instances of fly-tipping in South Gloucestershire.

Between August 2017 and November 2018 Hegarty operated a business known as ‘Ever Green Tree & Gardening Services and Rubbish Removal’, attracting work through cold-calling at addresses and hand delivering flyers.

The investigation found that in Hegarty was paid £140 to collect waste from a restaurant that was being refurbished in Calne, Wiltshire August 2017. The waste was later found fly-tipped in Lodge Road, Abson and in Ham Lane, Doynton.

In October 2018, Hegarty was then paid £150 to collect some waste from a householder in Withywood, Bristol which was later found fly-tipped in Woodend Lane, Rockhampton. Hegarty’s identity was confirmed following further enquiries.

He was interviewed under caution in February 2019 at the South Gloucestershire Council Offices in Yate, during which he admitted both fly-tips at Lodge Road and Ham Lane, and the fly tip in Woodend Lane, Rockhampton.

• Ask for a copy of the company’s waste carrier registration certificate and ask where the waste is being taken. Legitimate firms will be happy to provide this information.

• Check whether the waste carrier is registered by calling the Environment Agency on 08708 506506 or by checking on their website https://environment.data.gov.uk/public-register/view/search-waste-carriers-brokers

• Ask for a registered trading address and contact telephone number for the trader and get a receipt.

• Unwanted goods and household or garden waste can all be disposed of at no cost via the council’s Sort It centres.

• Residents who see illegal fly-tipping are encouraged to report it by using our web form at www.southglos.gov.uk/flytipping or emailing streetcare@southglos.gov.uk or contacting the Street Care helpdesk on 01454 868000.