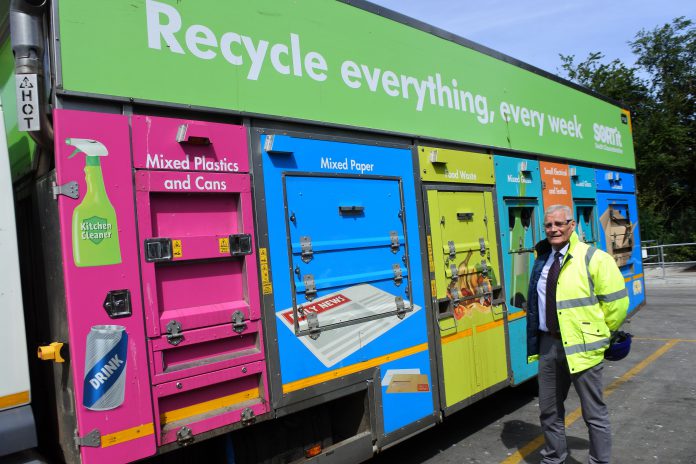 Thanks to the efforts of residents and staff, South Gloucestershire Council is celebrating the success of the first year of its new Waste Strategy.

Since weekly recycling collections began in June 2017, an extra 3,644 tonnes of recyclables have been collected, a 14 per cent increase.

Since the smaller black wheelie bins were rolled out over 12 weeks from January 2018, 3,350 tonnes less waste has been thrown away, a 16 per cent reduction.

While some experienced some inevitable teething issues with changes to the service, the overwhelming majority are now sorting their recyclables effectively and with a renewed focus on recycling more, putting less in their smaller black bins.

The changes deliver a less wasteful and more environmentally-friendly service, maximising value for money for residents.

We found that 52 per cent of the average households black bin rubbish could actually be recycled from home. Putting recycling in the black bin increases costs, affects our recycling rates, and wastes valuable resources.

We developed our Waste Strategy 2015-2020 to meet new financial and environmental; targets to increase our recycling rates, reduce the cost of collecting and disposing of landfill waste.

The main changes in the new waste strategy were:

• Collect all recycling every week instead of every fortnight, to simplify collections and make the recycling service easier for residents to use

Weekly recycling collections started on 19 June 2017 with a new fleet of collection vehicles.

The black bins were exchanged over 12 weeks from January 2018. We removed the old 240 litre bins and delivered 111,000 new 140 litre bins, which continued to be emptied every two weeks. The old bins were recycled to make new containers.

In addition to the headline figures, we have found that almost all of the recyclable items we collect have increased since weekly collections started. Cardboard and food waste tonnages have shown the biggest improvement with an extra 1,407 tonnes of card and 1,162 tonnes of food collected.

Councillor Paul Hughes, Cabinet Member for Communities and Tourism, said: “I want to thank residents and our staff who have contributed to the success of our new approach so far.

“The significant reductions in landfill waste being thrown away and the significant increase in recyclables collected not only provides better value for money for the community, but means we are doing our part to reduce our environmental footprint for our growing population.

“Our waste collection services are among the most visible that the council provides; it is one of those things that we do that everyone takes part in. We have learned a few lessons along the way, but public engagement has been constructive and the way the community has played its part has helped to ensure the success we can all share in now.”

Make sure your recycling is collected every week:

• Keep items separate in the green boxes. Sorting a jumbled box causes delays for our crews. The exception is plastics, cans, aerosols and foil, which should be mixed together.

• Line your food bin with a plastic bag, compostable liner or newspaper to prevent spillages