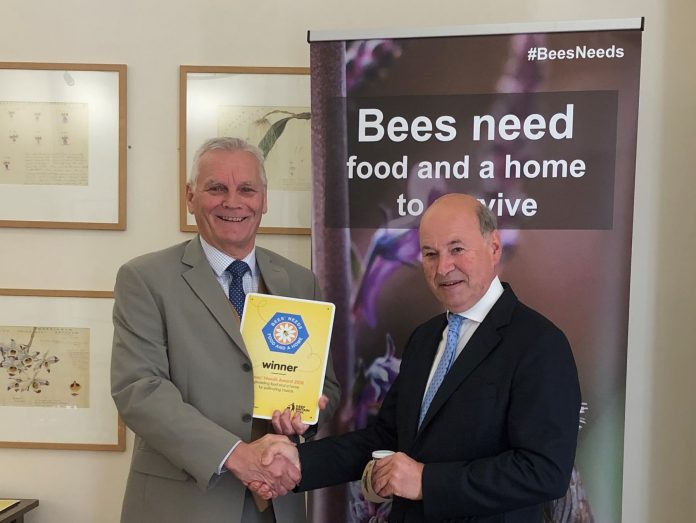 A South Gloucestershire Council community project has won a national award for creating a wildlife haven at Patchway Common.

The project picked up a Bees’ Needs Award 2018 during a ceremony at Kew Gardens on 13 November, hosted by Defra and Green Flag Award, in recognition of the work done to transform the site into a wildflower meadow to encourage pollinators and make it a pollinator-friendly habitat.

In recent years, the common had been unmanaged and the grassland was overgrown with brambles and scrub, so a project was devised to bring it back into active management whilst enhancing the community space for pollinating insects.

Working with national wildlife charity Buglife’s Urban Buzz project, we set out to turn the site into a buzzing hotspot.

Last autumn, we cut back the scrub and the land was prepared for sowing. Pupils from Wheatfield Primary School, which borders the common, visited the site and spread wildflower seed mix with the Chair of the Council.

Heavy snow covered the common last winter, but the hot summer produced a blaze of colourful flowers for bees and other insects to enjoy. Ecologists have surveyed the site and recorded a high variety of wildflowers, including an abundance of Yellow rattle, which will weaken the grass, enabling more space for wildflowers to grow.

This autumn, volunteers from the town’s Green Gym and Bradley Stoke in Bloom cut the meadow with traditional scythes. The cuttings were stacked and left for a few weeks before we collected it to be composted.

A management plan has been written and is being implemented with an agreement drawn up to ensure the common is now managed going forward.

Cabinet Member for Communities and Tourism Cllr Paul Hughes said: “Being in the heart of a busy town, this space acts as an important green lung for the local community. Patchway Common is on a main cycle and walking route and is a safer route to school, so it is used by hundreds of local residents each day.

“This project involved a very successful and important community partnership. It is a well-deserved award, congratulations to everybody involved.”

Hayley Herridge, Urban Buzz Bristol Project Officer said: “Buglife is delighted this community project has been recognised nationally. Bringing the common back into active management allows wild flowers to flourish, which in turn provides food and shelter for an array of important pollinators including bees, butterflies, hoverflies and beetles.”