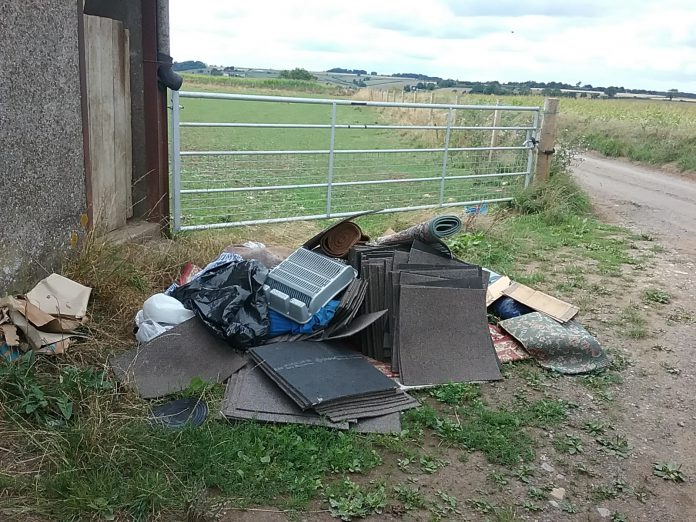 A Bristol man has been ordered to pay a total of £130 after being found guilty of committing waste-related offences, following a fly-tip that was discovered in Marshfield, South Gloucestershire.

Michael Connors, 74, of Walton Street, Easton in Bristol, was prosecuted by our environmental protection team after a fly-tip of discarded flooring materials was discovered on Rushmead Lane in Marshfield.

The magistrates court heard that the fly-tipping was dumped between August 12 and 13, 2018. It consisted of carpet tiles, rugs, plastic and cardboard packaging. South Gloucestershire Council’s Envirocrime officers traced the waste to an address in Easton, Bristol. On Thursday 16 August, 2018 officers attended that address, where they found the defendant working at the property. When he was shown photographs of the fly-tip he confirmed the waste had been taken from the property he was working at. He told officers he had paid two men driving a white transit van £50 to take away the waste, but was unable to provide any other details of these men or their vehicle.

Envirocrime officers interviewed Connors again at council offices, where he admitted failing in his Duty of Care regarding the disposal of the waste. He was charged under Section 34 (1) and (6) of the Environmental Protection Act 1990.

In court, Connors pleaded guilty to the offence and was given a conditional discharge for three months, along with clear up costs of £110 and a victim surcharge of £20, totalling £130.

The case was heard at Bristol Magistrates’ Court on Wednesday 24 April, 2019.

South Gloucestershire Council’s Environmental Protection Team Leader, Shaun Fudge, said: “Fly tipping is an issue that has a negative impact on our communities and local environment and we all have a responsibility to make sure that our waste is disposed of in the appropriate manner. Anyone that fly-tips in our area is five times more likely to be successfully prosecuted than anywhere else in the country.”

“Our award winning Envirocrime Team have a 100 per cent record of securing successful prosecutions for this type of offence, so if you fail in your duty of care and allow rubbish to be fly tipped in South Gloucestershire, you can expect to be caught and prosecuted.

“Residents and businesses are advised to only give their rubbish to an Environment Agency registered waste carrier. Contractors should ensure that they hold a Registered Waste Carriers Licence and they comply with the Waste Transfer Note requirements.”

Ask for a copy of the company’s waste carrier registration certificate and ask where the waste is being taken. Legitimate firms will be happy to provide this information.

Do not be tempted to use people offering cheap waste clearance on sites such as Facebook and Gumtree unless you have confirmed that they are registered with the Environment Agency.

Check whether the waste carrier is registered by calling the Environment Agency on 08708 506506 or by checking on their website https://environment.data.gov.uk/public-register/view/search-waste-carriers-brokers.